The History of Alpha Delta Pi 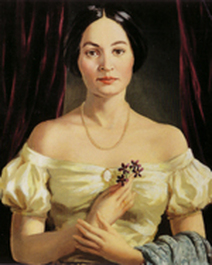 Alpha Delta Pi holds the distinction of being the first secret society in the world for college women. Alpha Delta Pi was founded on May 15, 1851 at Wesleyan College in Macon, Georgia. The original name of the sorority was the Adelphean Society, derived from the Greek word for "sister".

Eugenia Tucker Fitzgerald, along with her dearest friends Octavia Andrews Rush, Mary Evans Glass, Ella Pierce Turner, Elizabeth Williams, and Sophronia Woodruff Dews founded the Adelphean Society. The Adelphean Society's purpose was the betterment of one another and themselves "morally, mentally, and socially," and they took for their open motto "We Live for Each Other." Alpha Delta Pi continues to be one of the top sororities in the country and is one of only three sororities that has grown to be an international society.
Badge: The first diamond-shaped badge was worn by the Adelpheans in 1852. Stars were not included on this first badge, but it did have a monogram of the Wesleyan pin attached to the badge by a link chain, thus forming a guard. The Diamond symbolizes the strength and value of friendships. The diamond represents purity, and the four points represent the symmetry of a balanced life.

Open Motto: "We Live for Each Other"
​
Mascot: As a symbol of beauty and strength, the lion serves as Alpha Delta Pi's mascot. Within each member, the lion sounds strong and strides confidently forward to pursue her goal. The lion represents the strength of mind and the strength of character of each sister in Alpha Delta Pi.
​
Colors: Azure blue and white are the official colors of Alpha Delta Pi. Blue is symbolic of friendship, the basic spirit upon which Alpha Delta Pi is founded. White symbolizes sincerity and truth. Alpha Delta Pi seeks these qualities in all its members.

Coat of Arms: Elizabeth Moseley Coles, who was elected national president at the first grand convention, was responsible for having the coat of arms designed. Another sister of Alpha chapter, Agnes Chapman, is given credit for the actual design of our coat of arms. Symbolism from our ritual and our Alpha pin were combined in the coat of arms, and the design originally had a background of violets. In 1919, the convention body voted to make changes and the present design was accepted.